Discovered Treasure Amongst the Debris:

The Beginnings of a Park
by Jennifer Beverly, with C.A. Chicoine

In the spring of 2012, Price Chopper’s Continuous Improvement TEAM (Teammates Efforts Always Matter) focused their efforts on the neglected site of Fort Massachusetts. Jennifer Beverly, Becky Michalski, Lisa Alcombright, and Matthew Goodermote made up the TEAM. The then store manager, Patricia Pattison, was the facilitator of the group.

It started with a treasure hunt. Becky Michalski and Jennifer Beverly were hunting geocaches. And they were disheartened as to just how bad it was in there.

After discovering the placement of a GeoCache within the forested portion of the Fort Massachusetts site, the members of TEAM knew what they had to do. It was time to reclaim and rescue this historic site from what seemed like decades worth of trash and overgrown foliage.

The unforested portion of the site––where the boulder sits with its bronze tablet commemorating the fort and its defenders, given by the Fort Massachusetts Chapter of the Daughters of the American Revolution in 1976––had shown signs of neglect. The shrubs that had been planted along its sides had not been manicured, and was significantly overgrown, causing moss to cover much of the stone memorial, along with the stone pillars surrounding it. And the chains linking the pillars had become thoroughly rusted. The fully grown tree, to the right of the boulder, still had its original supporting fence around it with several inches of debris built up at its base, which was decomposed into leaf mulch, and had many new trees weaving themselves in and out through the chain links. Much of the surrounding growth on the edges of the park had encroached this area as well, reducing the size of the park each year.

Work began with the removal of the supporting fence from the tree, followed by a little grooming. 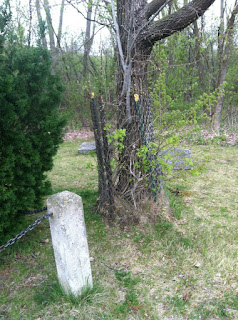 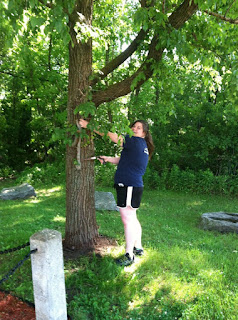 After several attempts at manicuring the shrubs into something aesthetically pleasing, it became obvious that they were far beyond that point and would be quite bare for some time. So they cut the shrubs down towards the base with hopes that they'd regrow from their deep roots. 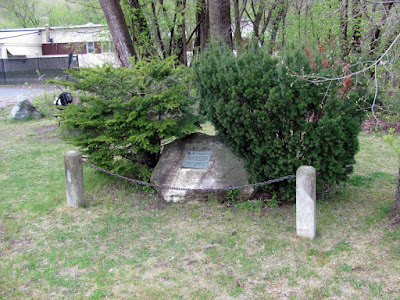 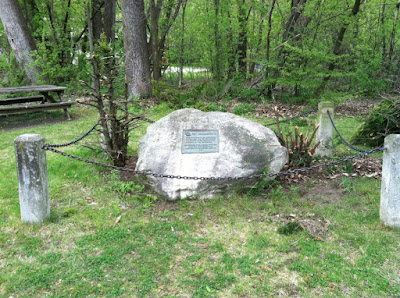 The group then shifted to the clean-up phase. After removing about a dozen bags of litter and debris, and having very little to show for it, the group decided to coordinate with the City of North Adams, and MCLA, to become a volunteer site for the city’s Spring Community Service/City Wide Clean-Up Day. With the help of seven Price Chopper teammates and their children, and ten MCLA volunteers, the group was able to remove over fifty bags of litter from the site along with many larger debris, which included, furniture, tires, computer monitors, a toilet, etc. This help was greatly appreciated by the group as they could now focus on the aesthetics of the park. 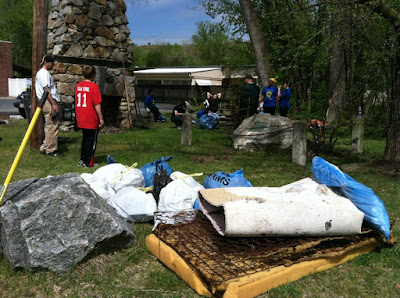 After the clean-up day, the group worked on cleaning the moss off of the stone marker and its pillars, along with giving the chains a protective layer of Rust-Oleum®  paint.

A cherry blossom tree was planted behind the garden bed with the hope to accent the area as it grows, while tying it in with other areas within the city.

A new garden bed was created around the stone marker to emphasize its presence. 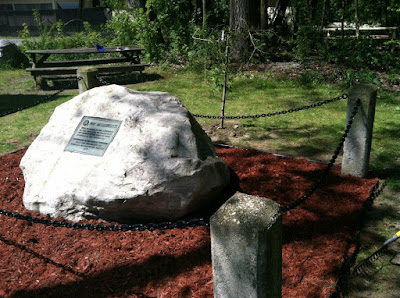 The existing picnic table was scrubbed clean and then weatherproofed to help sustain it for many more years to come.

The group then worked on creating a new shaded picnic area within the forest behind the stone marker. Lots of brush and leaves were removed as well as some partially decomposed litter. A new picnic table was purchased from Mr. Lescarbeau, who had created the other table years prior. And a new bench was added to the park for additional seating. 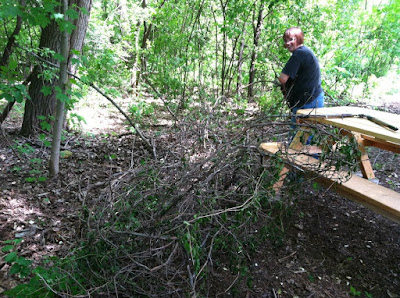 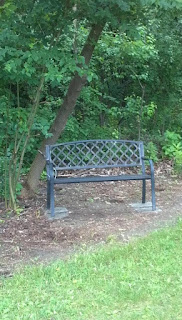 Over the years, many local residents had created a footpath through the forested part of the site. The group worked to clean up the path itself and line it with some fallen trees to encourage guests to stay on the path. 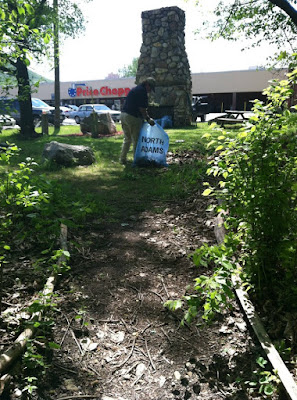 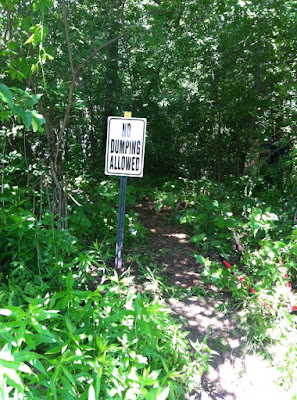 The group had tried to obtain a trash receptacle to match those of the downtown. After coming up unsuccessful, they decided to design and create their own. The receptacle is built around a standard trash can with masonry bricks and mortar. Screw eyes were added to give the ability to hang signs from the trash receptacle itself to encourage guests to dispose of their trash properly. 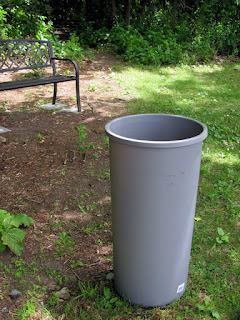 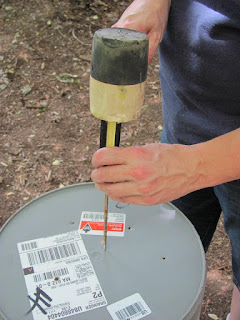 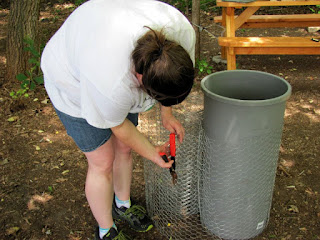 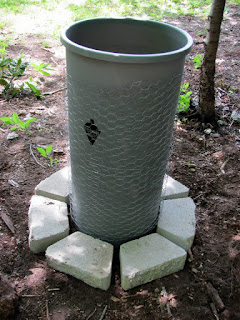 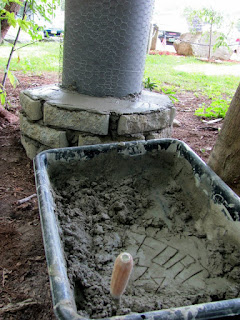 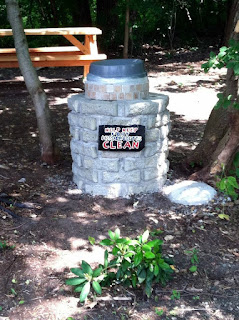 The excess mortar was used to create a stone marker acknowledging their work. 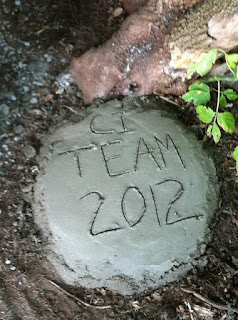 From the very first moment that the Price Chopper management stepped forward to reclaim the park at the site of Fort Massachusetts, members of the community became involved. And positive feedback came pouring in from both local residents and tourists alike. Many chose to now utilized the park, where it had gone unnoticed prior. There was an immediate transition in the commentary for the Fort’s Geocache as well––from negative comments regarding the lack of care and amount of litter, to positive comments, praising how well maintained is was. The North Adam’s City Council, North Adams Chamber of Commerce, and the North Adams Historical Society genuinely thanked the group for their efforts to enhance a little piece of our local history. 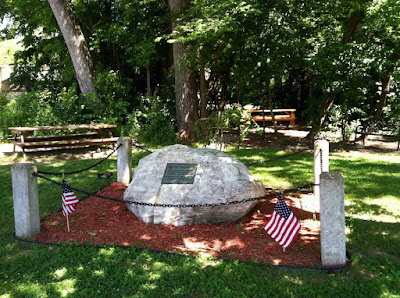 [UPDATE: The following link shows many comments over the years (from 2004 to 2011) of the site's condition prior to this clean-up. (You'll have to sign up to read it -- it has been archived. But sign-up is easy) https://www.geocaching.com/geocache/GCKNJ2_forgotten-fort#_=_ ]

The following are some of the comments found on their site.


10/03/2004
It's a tragedy that this historical site has depleted to just a marking plaque..here is one of the commonwealth's major historical locations and it is just casually mentioned..... – Peter

10/10/2004
Nice quick park and grab on this rainy day, only problem was I stepped in dog poop with my brand new hiking shoes!

10/10/2004
It's fortunate that the commercial development in the area hasn't totally destroyed the historic site. Moose-R-Us and I found this on our way back from a quick trip to Williamstown. Moose-R-Us wasn't watching her step, so I had to listen to some whining about some dog poop.

10/16/2004
A nice easy find just off a very busy spot. Nice parking though. Who'da thunk there was so much history in the corner of a shopping center parking lot. T/n, L/marbles.

11/15/2004
Thanks for the history lesson!
I had no idea, and never would have known if it wasn't for your cache / explanation.
It is so sad to think that all that is left in memory of such a site is a chimney and rock.
Thank you!
– Kristen & Mark

12/16/2004
Very historic site. Area should be cared for better. CITO [https://www.geocaching.com/cito/faq.aspx] is badly needed in the entire area. Rating should be downgraded to 1/1.5.
– Anniebananie

07/24/2006
What a sad story. A place with interesting history reduced to a roadside dump. Thanks for the history lesson. I wish people would learn to clean up their crap.

07/25/2006
I had expected it to be a micro in the obvious structure. The trail was nice as these sorts of trails go. Too much trash, way too much. A broken TV!!!

07/27/2006
We did a few loops before finding this one. We also found the trash...looks like a fence may have been put up too late to help curtail this mess!

10/23/2006
Its almost funny that the cache starts at a monument to the "Wilderness" area. First we built the area up and than we trash it. Shame on us.

01/10/2007
This is an interesting spot, and we loved reading about the history of the fort here. It is too bad that it has come to this sad condition. I just don't understand people who think nothing of throwing their trash over a fence. Thanks for pointing out this little diamond in the rough. – Printess Caroline and her loyal consort

05/28/2007
It's too bad we sometimes compromise our heritage for modern convenience. At least something remains to remind us on this Memorial Day.

06/06/2007
Thanks for the history lesson too bad that the fort could not have been maintained for others to enjoy.

09/25/2007
Yes much junk in area...there was a large industrial garbage bag left there filled with junk...what, whoever it was that brought the bag & filled it couldn't have brought it to a dumpster? lol I would have if I had a truck to haul it all. I hate seeing an area completely disrespected. This would be one good place for a small beginner CITO event.


05/04/2008
Interesting history, but not a very compelling scene today. The whole area is strewn with garbage.

11/26/2008
This was a quick find but I found the lack of respect for the historic site a bit sad but I enjoyed seeing this forgotten bit of history. Thanks for the cache.
– Team Taran

04/05/2009
Amazing how that small Memorial can look so clean and just a few feet away it is a complete dump!
– Qseekers, Jericho, VT

05/11/2009
Who would of thought that a big piece of history would be taken over by a PriceChopper. The placed was trashed. Was a sad sad day to find this place. Signed log and went for a tetanus shot.

05/15/2009
I always enjoy history based caches so I was very glad to find this one but also very disappointed by the sad state of the area. The area is in need of a serious clean up! There's more trash in this little area than in the entire park of latest CITO I attended. The cache container is in bad shape too and needs to be replaced. Thanks for bringing the history of the location to my attention though!

08/17/2009
Stopped on the way between N. Adams and Williamstown. Fascinating history, too bad the fort disappeared. Also too bad the area so closely resembles the local dump - to CITO this area, you'd need a bucket loader and an industrial dumpster. TFTC and the history!
– The Tau'ri #907

09/10/2009
Sad to see history go this route, but still ... it's about the freedom to choose what to do with your own property, isn't it. Still needs generous CITO, but TFTH and the reminder of the sacrifices made so we can play.

05/06/2011
There was a recent fatal car accident near the cache so I stopped by to take a look. There is now a new metal fence to replace the wooden fence that was mowed down by the car accident. The cache is still safe and sound. [April 28, 2011, a single-car accident near the Price Chopper parking lot killed one person and sent two others to the hospital early Tuesday evening. "The car hit a cluster of trees right next to where the old Fort [Massachusetts] used to be," North Adams Police Director Michael Cozzaglio.] 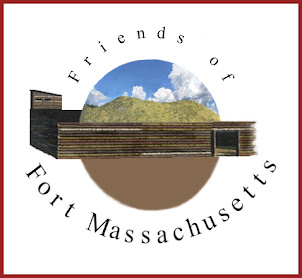